Over 30 million people are already using HelloTalk! Master any language by chatting with real people around the world! HelloTalk, the 1st global language learning and culture exchange community, connects you with native speakers of other languages (English, Japanese, Korean, Spanish, French, Mandarin Chinese, Cantonese, Portuguese, German, Italian, Russian, Arabic, Turkish, Hindi, Indonesian, Thai, Vietnamese, and over 150 other languages) for FREE! Practice your speaking, reading, listening, and writing skills now! HelloTalk is such a useful language learning app that helps people learn languages through user corrections. Forget those strict schedules and boring book lessons. Create a personalized language learning style that fits you, and start some conversations today! Why choose HelloTalk? ► The largest Language Exchange community HelloTalk has over 30 million users from more than 150 countries around the world. You can search for any language partner whose needs match yours. ► Core features - Moments flow Use Moments to share and ask questions about language, culture, or travel to native speakers of whatever language you'd like to learn. Here you can even post audio messages and get feedback on your pronunciation from native speakers. ► Perfect your Pronunciation Practice your target language with native speakers via text/audio/voice messages, or even audio and video calls for free. What's more, the text-to-voice and voice recognition functions can help you boost your pronunciation. ► Enhance your Grammar Skills HelloTalk has a built-in grammar correction function, which makes you more confident when chatting. It will automatically correct any potential errors before you send a message. After a little while, you will be able to write sentences without grammatical problems! ► 1 on 1 language lessons HelloTalk also provides hundreds of native tutors for you to have 1 on 1 language lessons. These tutors all have language certificates and practical teaching experience! Having actual interaction is the best way to learn a new language! We connect language learners from all over the world to create a community that makes language learning more fun, natural, and vivid. Our vision is for there to be no difficult languages to learn! What the world is saying about HelloTalk: “One of the best apps to help you learn a new language.” - 9to5Mac "When you're ready to experiment with a foreign language, HelloTalk provides an excellent opportunity for interaction with other speakers." –PCMag "BEST FOR LEARNING SYNTAX……Rather than focusing on rote memorization, you learn to speak in foreign tongues by conversing with actual people." -Mashable "HelloTalk, which connects native speakers with an apprentice, also offers language exchanges to its 20 million users in more than 150 languages." -Forbes START PRACTICING LANGUAGES RIGHT AWAY!!! Learn English and practice spoken English Learn Japanese and practice spoken Japanese and chat with Japanese Learn Korean and practice spoken Korean and chat with Korean Learn Spanish and practice spoken Spanish Learn French and practice spoken French Learn German and practice spoken German It should be noted that HelloTalk is not a dating app. Although you can meet people from all over the world, HelloTalk should only be used for language learning. Meeting people for dating is not allowed in the community. Learn more about HelloTalk: Facebook: https://www.facebook.com/Hellotalk/ Twitter: https://twitter.com/hellotalkapp Send any feedback to support@hellotalk.com * Privacy Policy: http://www.hellotalk.com/privacy-policy * Terms of Use: http://www.hellotalk.com/terms-of-service 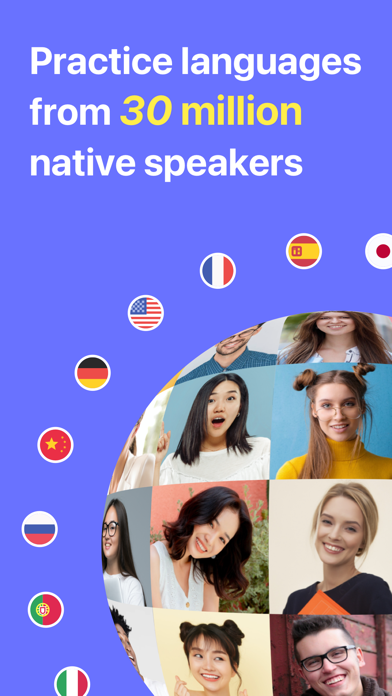 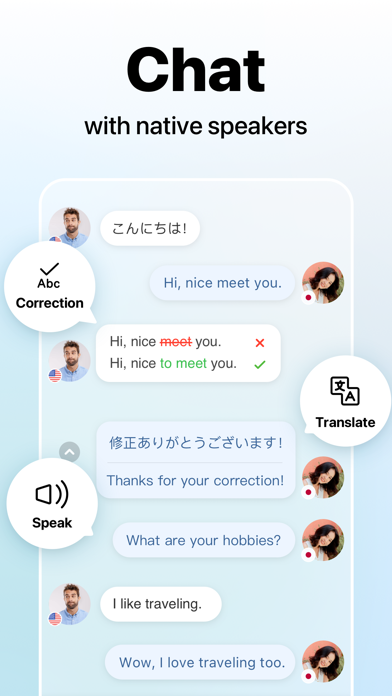 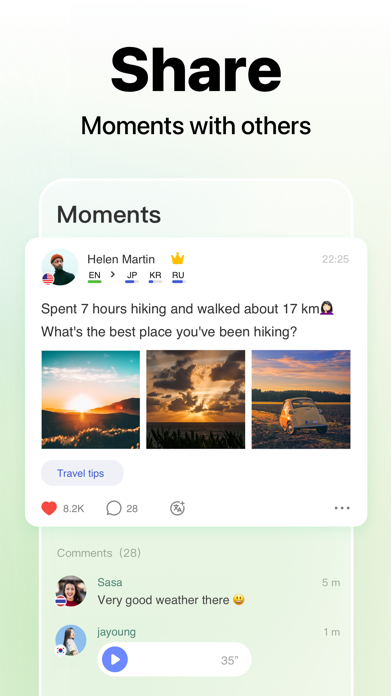 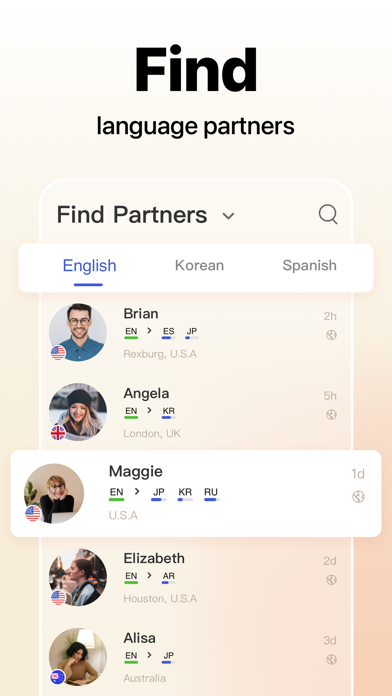 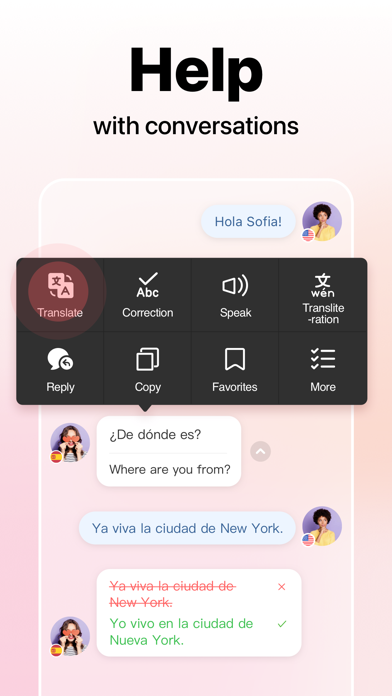 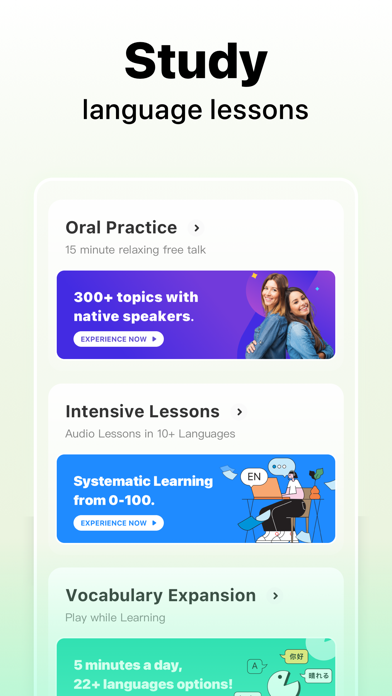